A rare form of epilepsy called Dravet syndrome begins in the first year of your baby’s life. It typically manifests itself as a lengthy seizure that lasts longer than five minutes and is brought on by a high fever.

Seizures can be of various sorts and intensifies in children with Dravet syndrome. They also exhibit a wide range of other signs, such as developmental delays, difficulties with speech and language, and difficulties with balance and walking.

Is Dravet Syndrome a Genetic Condition?

Dravet syndrome is heritable. It is an autosomal dominant disorder, [1] which means that only one parent needs to pass on the mutant (alter) SCN1A gene for you to develop the condition. The affected gene is located on one of the 22 non-sex chromosomes from either parent (autosomal). Your child has a 50% chance of inheriting the damaged gene if one of you has the mutant (changed) gene.

Genetics is complicated. The SCN1A gene [2] has around 6,000 potential locations for mutations. This indicates that a large number of youngsters have gene mutations that are unique to them. SCN1A mutations cause a variety of related diseases, including migraines, mild-to-moderate types of epilepsy. The most severe form of epilepsy, known as Dravet syndrome.

How Common is Dravet Syndrome? 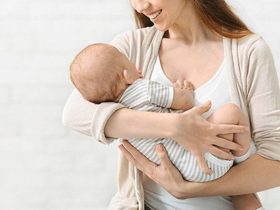 Breastfeeding Positions And Tips For Mom And Baby

No matter how many times you’ve had a baby, it is always going to be an exciting experience. It is a process that is filled with many pleasurable memories. According to experts, one of the most intimate activities a mother can do with her child is breastfeeding. It facilitates deeper ...