Ticks are tiny, blood-sucking bugs. They are usually very small in size, but their sizes increase as they consume more blood. Ticks have eight legs and belong to the same class as spiders—arachnids.

These bugs come in varying colors ranging from different shades of brown, red, and black. A tick, which is usually as small as a pin’s head can take in lots of blood to become about the size of a marble. Ticks usually feast on the host for several days, which makes them become engorged and can turn a greenish-blue color.

Ticks like to feed on the warm moist areas of the body like the armpit, groin, or scalp. They can remain on the skin, feasting on human blood for up to ten days, after which they detach themselves and fall off.

Tick bites are usually harmless, leaving no symptoms, but in a few cases, they can cause allergic reactions in the human or animal the bite. [1] The severity of symptoms varies from person to person. Only those who are allergic to tick bites will experience some symptoms.

Some of the common symptoms are: [2]

Asides from the allergies that can be suffered from a tick bite, some ticks carry diseases that can be transmitted to humans. [3] A common disease transmitted by ticks is Lyme disease. Common syndrome of this condition includes rash, swollen lymph nodes, fever, chills, headaches, fatigue, muscle aches, and joint pain.

Other diseases that can be transmitted by the tick bug include Rocky Mountain Spotted fever, tularemia, and ehrlichiosis.

Antibiotics have proven effective in the treatment of tick bites. Taking medications for up to ten or fourteen days can significantly improve symptoms of tick-bite allergies.

Ticks are found in outdoor spaces. They hide in trees and grasses and often latch onto pets such as dogs and cats. There are different types of ticks but they’re usually at their highest number in the spring or summer. It is advisable to check your body out, from your head to your toe carefully after completing an outdoor activity to ensure that you don’t have a tick on your body. It takes up to twenty-four hours or more for a tick to infect the host with any bacterium. Hence, immediate attention to the bite site can reduce the severity of symptoms.

A tick bite can be confused with a mosquito bite because it leaves a red and bumpy patch on the skin, which usually resolves in a few days.

Let’s take a closer look at some of the symptoms of a tick-bite. [4] 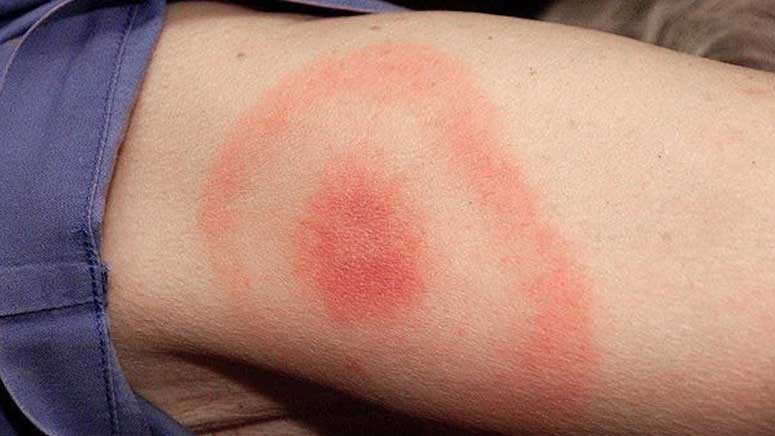 After a few weeks of getting bitten by a tick, a bull’s eye rash will appear at the bite site. [5] This rash is common where the tick is carrying the Lyme disease bacterium and infects the host. The rash is distinguished from other types of rash because it has a red center, surrounded by a clear ring, and with a red circle surrounding it. The circle can be up to twelve inches or more. The bull’s eye rash can last up to several weeks before it disappears. This type of rash is usually flat and does not hurt or itch.

If left untreated, the infection may spread to other parts of the body, where other types of rash form. Also called lesions, they have a uniform red color, with a different shape from the bull’s eye rash. Usually, they have a round or oval shape with sharply demarcated borders.