Electronic devices are a practical component of daily life for many individuals. You can use them to perform things like microwave food or browse the internet information.

However, some individuals think they are allergic to radiation that is emitted from electronics. This assumed condition is known as electromagnetic hypersensitivity, or electrohypersensitivity (EHS). [1]

It occurs when a person feels particularly sensitive to electromagnetic fields (EMFs). Often referred to as radiation, EHS are emitted from various electronic gadgets, such as Wi-Fi routers, computers, microwave ovens, and other home electronic appliances.

People who claim to have EHS claim that exposure to EMFs causes symptoms like:

It is believed that EHS initially became well-known in the middle of the 20th century. The former Soviet Union claimed that EHS, sometimes known as “microwave syndrome”, was experienced by military and civilian radio technicians operating with radar.

In 1991, the term “electromagnetic hypersensitivity” first surfaced. Since that time, a lot of people have claimed to have EHS, particularly as electronics have become more popular.

Despite of these reports, the medical community does not acknowledge EHS as a disease. Studies have been unable to clinically link EMFs and the observed symptoms. Furthermore, there are no objective standards for diagnosing. As a result, EHS is a self-diagnosed condition. Let’s examine what the research has to say about the condition and its management. 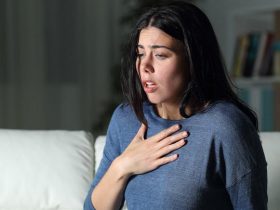 Asphyxiation Asphyxiation, sometimes termed asphyxia or suffocating, occurs when the body doesn’t acquire enough oxygen. Without prompt assistance, it may result in unconsciousness, brain damage, or even death. Asphyxia is not the same as being asphyxiated. Asphyxia refers to the absence of oxygen, whereas asphyxiated denotes death as a result ...